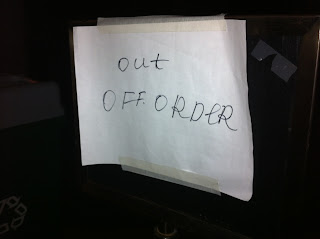 Deutsche Bank worth how many trillion?  Well Deutsche Bank and Amanda Burden you evil vile corrupt shrew make sure the toilets are open at 60 Wall Street Public Private Space and I don't to hear excuses and or blame by DB about why.

If you want a taste of the real Deutsche Bank watch DB try to evict a 103 year old African woman on her death bad from her home!
http://madamenoire.com/111360/103-year-old-atlanta-woman-spared-eviction-by-movers/

http://suzannahbtroy.blogspot.com/2011/12/african-american-woman-on-her-death-bed.html
Amanda the People's Burden is the head of City Planning and she is the most corrupt city planner ever to  even pretend she represents the People of NY.  She represents the greedest most ruthless developers posing as Mother Teresa -- yes the newest dirty deed refusing The People protecting zoning so ONLY a hospital could be built where St. Vincent's was.  Don't worry  Cy Vance won't even begin a prosecution of St. V. corrupt dealing let alone look at Rudin's acquisition and DOB giving Rudin permission to begin demolition even though City Planning had yet to rule on zoning because the fix was in and even Dept. of Building was in on it (as usual?).

Toilets closed again -- ask me how much I hate Amanda Burden and Deutsche Bank.
DB can figure out how to make trillions -- probably plenty off of Jewish Gold they stole as they helped in the mass murder via financing Auschwitz and IG Farben.

So Amanda Burden has a dirty filthy hand in the toilets or the lack of availablity because 60 Wall Street is a privately public owned space.   She could have made sure that for instance when I was there and witness a handicap woman in a wheel chair in need of toilet -- have use of a toilet but Deutsche Bank and Amanda Burden support the systematic harassment of Occupy Wall Street which I had an in your face taste of.
I went home and google Deutsche Bank Nazis and it took me time to allow myself to fully understand Deutsche Banks direct Nazi role -- financing Deutsche Bank and IG Farben as in the gas to mass murder Jews before robbing and torturing and starving them to death and also the expermination by Dr. Mengele.
Until Deutsche Bank removes their in my opinion  very disturbed ex Marines -- who harass Occupy Wall Street and OWS visitors with intimidation and language like 'I f//cked your Mother", You are shit." I am not a civil servant I don't have to give you my name.
By the way a small skinny ex marine woman with very long hair and high heels and low skirts with real fur coat is the queen nazi of the abusive men dressed in black with no identification and refuse to admit they work for DB.  The NYPD told me the truth.
Until DB fires them and hires human beings I will keep posting.
I looked up info on whether they paid my friend for their role in his torture and slavery...still working on it but guess what?  If Dr. Mengele experimented on you -- you compensation still falls under "slave labor".  Nice huh?
If Deutsche Bank's abusive security had not been so Nazi-esque I would never have learned all this.
http://suzannahbtroy.blogspot.com/2011/12/suzannah-troy-artist-deutsche-bank.html
Part 1 of Deutsche Bank The Scream is about to break 800 views soon and you can see the fur clad Nazi queen and even her say of me, "Here she comes."   I won't rest until you are fired.  I had this before with someone who is abusive and that person is protected so I wait for karma pie to be served.  I wrote a fictional story where the heroine is murdered but she comes back as a ghost and her ghost is angry than Hamlet's Dad.   In my fictional story justice is served.
In real life I am patient, very patient and the good news about people that screw with me is they always under estimate me.  I also think G-d or Karma serves Justice better than court systems sometimes.
By the way Deutsche Bank profited big time from stealing from the Jews including our gold and Credit Suisse was one of the Swiss banks that was the Nazi's bankers but DB was pure Nazi in direct action to exterminate the Jews.